You might know Gary from his work with Sports Illustrated like his cover of Tim Tebow. A few years ago, when we were chatting, Gary mentioned that he was the official photographer for the MJ Flight School. And two weeks ago, Gary called me up and invited me to be his guest in Las Vegas to witness the camp for myself.

I don’t consider myself to be particularly impulsive, but I like to hit the tables, and I sure like basketball, so I figured “what the heck.” A few minutes later, I bought a ticket to Vegas to rub shoulders with Air Jordan.

Before you yell “junket” at the top of your lungs, let’s consider the business of photography for a moment. Gary was a former Miami Herald staffer who hobnobbed it with the likes of Bill Frakes and Brian Smith back in the day. But several years ago, he decided to pull the trigger and go freelance, and like all smart freelancers, he splits his work between editorial and commercial work. And a key to his on-going success is his constant desire to diversify the type of work that he does, and the Flight School is no exception.

But before we hit the hoops, let’s appreciate the USA. When we were chatting about the event, Gary told me that he was flying out a day early so that he could visit the Valley of Fire State Park. In 2003, I spent the better part of 18 months driving to all 48 contiguous states, in what was one of the more fulfilling adventures of my life. I love to see different parts of the country, and although I’ve been to Lake Mead, Hoover Dam, and Red Rock, I hadn’t visited the Valley of Fire. So I put the impulse engine on full, and headed out with him and his two assistants. I realize that travel is a luxury, but if you have the ability to visit all the states in your lifetime, you should. Not only will it give you an appreciation of geographical diversity, it will also give you context for cultural diversity. Red state, blue state, it starts to make sense when you’re immersed in the environments.

The next day, Gary had to shoot portraits of the coaches for the official poster. You might have heard of some of these guys like Roy Williams, John Calipari, PJ Carlesimo, John Thompson, Doc Rivers, Mike Fratello, and the list goes on and on. What become clear in seeing Gary interact and photograph these guys is that he really understands how to get the shot quickly and efficiently. Everyone who does event photography regularly understands this concept, but when you’re dealing with Hall of Fame coaches and Michael Jordan, you need to dial the professionalism up three notches. (The posters, by the way, are authenticated by Upper Deck — the benefits of paying $15,000). A few other notes:

The pressure cooker event was the meet and greet dinner where Michael takes a picture with each camp attendee. Gary rented a red velvet background which was lit with a large softbox and two side lights, which was set up earlier in the day. But a few minutes before the event started, the house lights were dimmed so there wasn’t sufficient light to focus, so Gary had to requisition a light to be installed from the rafters. Then Michael’s manager insisted that a partition be moved to block off any on-lookers. Then a pissy facilities manager got into a tussle with Gary about moving the light stands, etc. But hey, no problem. We had a full 14 seconds before Michael shows up.

If you want to see a well oiled machine, hang out with an event photographer shooting red carpet with a celebrity. Not only did Gary have his technique down (3 images per group which ranged in size from 2 to 7), but Michael also had his stock salutations down like a pro. “Hey, good to see you again. How’d you do today? Don’t get hurt.” Next.

Well, except when BB King showed up. By the way, if you were wondering what the gray stuff is on the bottom of the backdrop…. The campers play a tournament on one of five courts which are installed in the largest ballroom you’ve ever seen. Here’s two of the five: On Day 2, Gary took a team picture as well as a coaches picture. 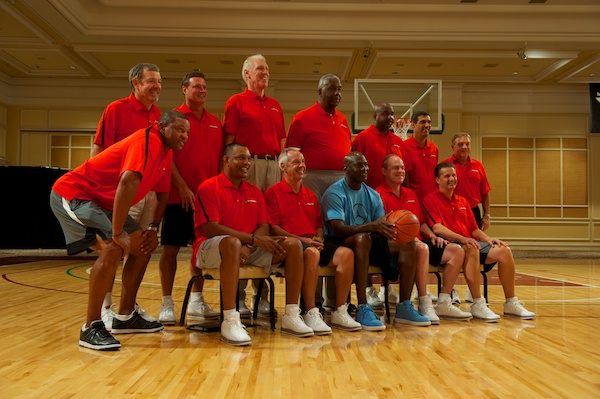 Shortly thereafter, Michael held court to talk about his approach to the game. The campers sat around the 3 point line, and a few (un)lucky campers got to go 1-on-1 with Michael. It reminded me of Team USA playing Angola in the 1992 Olympics. “I’m getting schooled by Jordan! Please take my picture!” In fairness to the other guy, Michael missed the bulk of his shots (but still won). He doesn’t always win. Jordan had the Tar Heel Blue on. Gary set up (4) white lighting strobes in four corners of the room — probably a good 100 yards from the court. His stated goal was to illuminate the courts in such a way to get good foreground/background separation and make an interesting picture. He didn’t have to go through the trouble, but I think by pushing his creativity, he ensured that he’s asked back year after year. By the way, I always respected Michael’s game, but I found a new respect for his charisma, intelligence, and ability to articulate himself. He spoke both as a former player, and as a current owner within a league that is likely to experience a labor lockout, and it was fascinating. If we were to really dissect this gig, it’s nothing more than glorified event photography. It’s not sports photography, portrait photography, nor celebrity photography. It could be construed as mundane and boring, and yet, it obviously pays well enough for Gary to take a week of his time. More importantly, Gary finds a way to consistently deliver beyond what is expected to make sure he can rely on the revenue next year. Jordan’s people know that Gary will get the job done, period.

Oh, and I won money at the black jack tables.

Ain’t interested in photography? The skill level of the attendees is best described as “good rec league” players with the average age in the early 40s range. Many of the attendees have attended the camp on multiple occasions, and they all take it very seriously. There are multiple athletic trainers to tend to injuries, the coaches call plays and yell at players, oh, and the food is delicious. Maybe I’ll see you in Vegas next year….