In 1991, Vanity Fair shocked readers with a cover featuring a nude and pregnant Demi Moore. Fresh off her success in the movie Ghost with Patrick Swayze, the red hot actress wanted the image, which depicted her 7-months pregnant with child Scout (the daughter of then-husband Bruce Willis), to reveal an “anti-Hollywood” attitude. Annie Leibovitz’s image did just that, revealing the nude form of pregnancy as a conversation piece that yielded a polarizing reaction. Some thought the image was beautiful, while others thought it sexualized pregnancy – and it was controversial enough that many supermarkets refused to carry it.

In 2017, Leibovitz rebooted the cover with tennis star Serena Williams – arguably the GOAT (greatest of all time) athlete male or female – in what will surely be remembered (or not) as a much less controversial cover by virtue of its place in history. Let’s take a look!

The Moore image comes from the film era and is shot on large format. Shot on gray seamless paper, Leibovitz used a very soft light source camera left that appears to be relatively small compared to some of the massive octaboxes in use today. The drop off in light from the face to Moore’s legs is apparent. The retouching looks minimal (perhaps some in her legs in buttocks where we might expect to see stretch marks). Her make-up, hair and accessories are glamorous, and I’m loving her glance. The tonality of the image is quite lovely.

The image led to much parodying including this movie poster for The Naked Gun 33 1/3 starring Leslie Nielsen. Oh, the humanity! 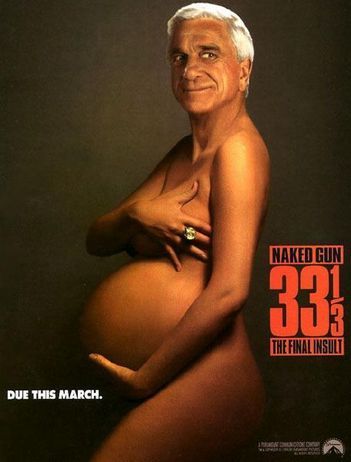 It’s hard to shock with the nude form any more. Martin Schoeller did it in 2012 with his breastfeeding cover for TIME, but that was less about nudity and more about the polarizing opinions about breastfeeding (particularly in public…with your 3-year old). In that regard, Leibovitz’s 2017 image with Serena Williams is easier to dissect because we’re less distracted by the nudity of it. For this series, we get an upgrade from seamless to the well-regarded and pricey Oliphant backdrop. The texture of the background breaks up the monochromatic monotony without being distracting. As we can see from the inset image below, we’re not in a studio, but rather in a backyard. The light is very diffuse and it’s really hard to say what the lighting pattern is here. Leibovitz loves her strobes, and I assume that she used some fill on the front (look at the texture detail of the hair). We might also surmise that Leibovitz placed a big diffusion panel overhead to blunt the unpredictability of the sun.

The placement of the hand on hip rather than over the belly combined with the flowing hair is much more empowering pose than Moore’s – it’s Wonder Woman, except this is no actress. It’s almost a combination of homage to her on-court attitude combined with a softness of pregnancy. Unapologetic, athletic, and we should also point out that Williams is 35-years old – not the 29-year old that Moore was. 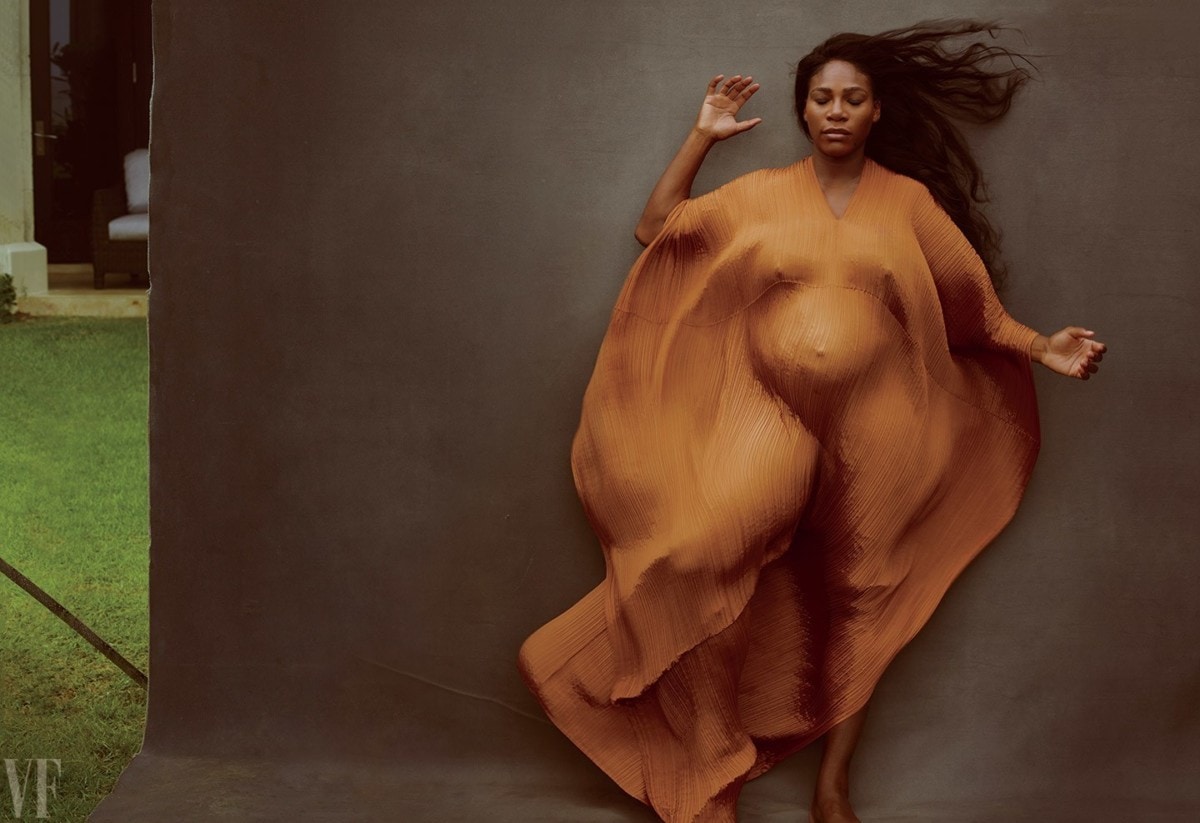 Back to that inset image, I love it. The texture of the bright material creates some wonderful shadows. The contrast of the retouching on the material is just right.

Verdict: We ought not to judge a historical image with a contemporary lens, but I’m going to do it anyway. In the context of the history of photography the Moore image will obviously be more of a stake in the ground. But I think the Williams image is the stronger (literally) image of an older, more accomplished individual.